The Basics: I grew up in a small, three-bedroom ranch house in Wisconsin. From early on, I've loved to read, so much that when I was a little kid I remember my mother ordering me to put the book down and go out and play. My husband and I moved to Texas for his job in 1980. We live in Houston with our dog, a funny and fluffy white and gray Havanese named Nelson. I love it here.

My Career: A late bloomer, I finished college in my early thirties and then spent nearly twenty years writing for magazines. It's been a lot of fun, and, in the process, I contributed more than 100 articles to national magazines that include: Ladies' Home Journal, TV Guide, Rolling Stone, Texas Monthly, Seventeen, MORE, Town & Country, Readers' Digest and others.

Although I travel often to do research, Texas is not only my home but my favorite subject. I began my career at the late-but-great Houston City Magazine. That's where I covered my first murder case, the incredible story of a deadly love triangle in The Big Thicket, the wide expanse of pine forests that blends Texas into Louisiana. From that point on, I was hooked. One of my favorite magazine pieces ran in Rolling Stone in March, 1988: Blues and Bad Blood, recounting a brutal double murder. It's a sad story but an amazing tale, mixing music, drugs, and murder. Both these cases and others are in my ebook anthology, MURDER, I WRITE.

In the years that followed, I was the editor of Ultra, a state-wide, monthly magazine that catered to the well-heeled set. I was never really the diamonds-and-caviar type, so it was way out of my niche, but, hey, it was fun, and I went to the most extravagant parties. No doubt they cost more than I made those years. Since then, I've written articles on everything from infertility to the McCaughey septuplets, interviewed celebrities including five first ladies and two presidents, and had more than my share of unforgettable experiences. In fact, I've covered many of the biggest stories, including interviewing victims in New Orleans after Hurricane Katrina and Oklahoma City days after the bombing. Not long after September 11, I traveled to New Jersey to talk with Lisa Beamer whose husband, Todd, uttered that famous battle cry "Let's Roll."

I was looking for a good subject for my first book in 1992 when I interviewed Linda Bergstrom for a magazine article. I knew immediately that I had found the right case. The result: EVIL BESIDE HER (formerly titled THE RAPIST'S WIFE). Following that, along came Susan White, Kent McGowen and A WARRANT TO KILL. Then I was off to Austin for the next three books, the first SHE WANTED IT ALL, on the Celeste Beard case, followed by DIE, MY LOVE, on the Piper Rountree case, set in Austin/Houston/ and Richmond, Virginia. The books kept piling up, too many to mention here, but all  have pages on this website.

During my more than two decades as an author, I've written eleven true crime books and expanded into fiction. The first book in my debut mystery series, SINGULARITY introduces Lieutenant Sarah Armstrong, the Texas Rangers' lone profiler, as she hunts a seriously strange killer. The case quickly takes over Armstrong's life and nearly destroys her. BLOOD LINES came next, then the third in the series, THE KILLING STORM, which was named one of the best mysteries of 2010 by Library Journal.

During COVID I finally left Texas (in my imagination) and wrote three books in the Clara Jefferies series. Set in the Utah mountains, in a polygamous enclave, the books delve into a strange and isolated world, a great setting for mysteries to unfold.

I'm a member of the Author's Guild and Mystery Writers of America. I do enjoy the writing, and I sincerely hope you enjoy the reading! 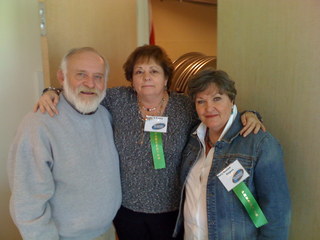 At the Best of the Southwest Book Festival, March 2009, in Lancaster, TX. Left to right: one of my heroes, author Carlton Stowers, yours truly, and Fort Worth writer and fun lunch companion Mary Rogers, the author of "DANCING NAKED: Memorable Encounters with Unforgettable Texans."

A recent read: "A Fly for the Prosecution: How Insect Evidence Helps Solve Crimes," by M. Lee Goff.